Hello fellow travelers, welcome to my blog. Hopefully you will find it a place of refuge, a beacon on a hill, a respite from the trials, tests and tribulations of a fallen world. May you find nourishment for your soul, equipment for your faith, and peace for your walk down the narrow way to that Celestial City.

The central text for this blog is 1 Pet 2:9, which reads thus:

But ye are a chosen generation, a royal priesthood, an holy nation, a peculiar people; that ye should shew forth the praises of him who hath called you out of darkness into his marvelous light: Which in time past were not a people, but are now the people of God: which had not obtained mercy, but now have obtained mercy. Dearly beloved, I beseech you as strangers and pilgrims, abstain from fleshly lusts, which war against the soul;

So, am I trying to say that I’m a strange stranger in a strange land?

No, not really. ‘Peculiar’ in the original Greek actually means ‘possession’, ‘acquisition’ or ‘purchase’. In this context I believe a ‘purchased people’ fits aptly. A pilgrim is a ‘resident foreigner’.

I, like all men and women abiding in the Gospel, have been purchased with a price by the precious blood of the Lamb, Jesus Christ. We are now God’s possession, a treasure bought by His grace. He has chosen us according to his mercy. We are His royal priests, a nation of people set apart for His purposes. We are His precious treasure in broken clay vessels. He has set us in exalted places to sing His praises forever more. We have been made foreigners in this dark world and are residents only by virtue of our continued presence here. We are now the citizens of Heaven. The New Jerusalem is our eternal home.

Come, walk with me on this journey from the City of Destruction, through the Slough of Despond, and the Valley of Humiliation. Let us storm together through Doubting Castle and slay Giant Despair. By God’s grace we shall emerge from Vanity Fair unscathed by worldly enticements. Let us find rest for our souls in the Palace Beautiful and in the midst of the Delectable Mountains. Fearlessly, let us tread through the Valley of the Shadow of Death. Finally, we must cross the River of Death with full confidence that the Lord will not allow us to sink into the Abyss and be forever lost. The Celestial City awaits all who remain faithful to the end.

Thank you for the company on this long pilgrimage to our eternal home. Let us carry on, weary travelers!

PS: About My Picture.

The graphic header I use as my blog’s theme is a stain-glass representation of a scene from John Bunyan’s classic Christian allegory The Pilgrim’s Progress. The picture is entitled ‘Evangelist Points the Way.’ This and several other stain-glass depictions of Bunyan’s book can be found at Bunyan Meeting Free Church in Bedford, England. Below I have included the text from the book describing Christian’s (the story’s protagonist) first encounter with the character named Evangelist. This excerpt is lifted from the Accurate Revised Text by Barry E. Horner.

Now I noticed on a particular occasion, when he was walking 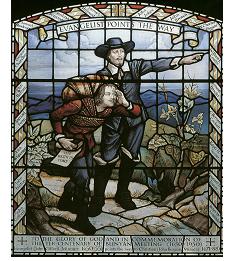 in the fields, that he was (according to his habit) reading in his
book, and greatly distressed in his mind; and as he read, he
burst out, as he had done before, crying, “What shall I do to be
saved?”

I also saw that he looked this way and that way, as if he
would run; yet he stood still because, as I perceived, he could
not tell which way to go. I then looked and saw a man named
Evangelist coming to him who asked, “For what reason are you
crying?” He answered, “Sir, I understand by the book in my
hand that I am condemned to die, and after that to come to
judgment; and I find that I am not willing to do the first, nor
able to do the second.”

Then said Evangelist, “Why are you not willing to die since
this life is accompanied with so many evils?” The man answered,
“Because I fear that this burden that is upon my back will sink
me lower than the grave; and I shall fall into Tophet [a place of
burning]. And sir, if I am not fit to go to prison, I am quite
sure I am not fit to go to judgment, and as a consequence to
execution; and the thoughts of these things make me cry.”
Then said Evangelist, “If this is your condition, then why are
you standing still?” He answered, “Because I do not know
which way to go.” Then Evangelist gave him a parchment
scroll on which was written within, “Fly from the wrath to
come.”

Therefore the man read the scroll, and looking upon
Evangelist very carefully, said, “Which way must I go to
escape?” Then said Evangelist, pointing with his finger beyond a
very large field, “Do you see a Wicket-gate [small gate] over
there?” The man replied, “No.” Then he was asked, “Do you
see a shining light not quite so far away?” He said, “I think I
do.” Then said Evangelist, “Keep that light before your eye, and
go directly toward it, and then you shall see the gate, at which,
when you knock, you will be told what you are to do.”
So I saw in my dream that the man began to run. Now he
had not run far from his own door when his wife and children,
perceiving his departure, began to cry out to him so that he
might return. But the man put his fingers in his ears and ran on
crying, “Life, life, eternal life.” So he did not look behind
him, but rather fled toward the middle of the plain..

3 thoughts on “About This Blog”